I love multiple miniatures/small multiples. Here's an example from An Introduction to Small 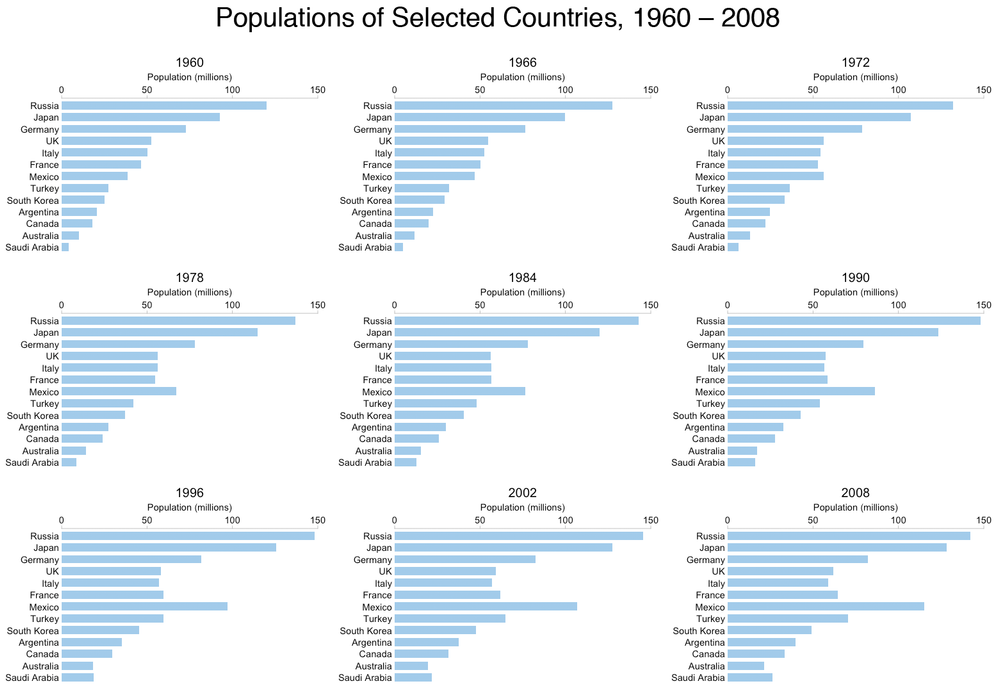 I'm pretty new to Domo and it only just fully hit me that Domo has a One Card = One Graph rule. Unless the chart itself supports an alternate presentation (like a pie chart with a detailed legend), you can't combine elements on a card. I can see what a huge simplification that has brought to the UX/UI in Domo, and the cards always look good. Still, not supporting small multiples is a loss. For chart types that can be compared accurately, multiple miniatures are just the best!

Rather than propose breaking the one card/one graph rule, I'd propose making multiple miniatures an option for appropriate card types. That's pretty much any kind of line, dot, scatter, of bar chart. You just need a category to break out the miniatures by, like year in the example above.

For our projects, we could use multiple miniatures constantly. We're really interested in comparing change over time, variation by department, and differences between facilities. You can do that with line charts and such, but multiple miniatures just work so much better.

Note: You could make individual charts and then put them in a collection, but then they aren't visible together. Multiple miniatures on one card with a filter or highlight option? That would be amazing.

It would be nice to have control over the size and layout of the miniatures a bit too.

Note: I downloaded Tableau today to mock up a slope chart and noticed that it seems to default to multiple miniatures as soon as it has enough data. I'm not complaining about Domo (I'm loving it!), but I was pretty forcefully reminded how nice it is to have support for small multiples.