I took the screenshot below to display a few things:

-I have a grouped bar chart, sorted from Most to Least.

-The sort order is based on an aggregate count of values across all the different categories in my series.

Because of this, the legend order and color scheme are set based on most to least count of those values. I tried adding my series name next in the sort order to get the legend to sort, and it did not work.

I would like to sort this series A-Z, first because logically that is how my users would expect ot read this chart, and second because it is one of a handful of charts with this exact display, and I want to ensure the orange bar is alwys the same "show name", likewise blue, etc. etc.

I know ideas have been submitted/Liked about creating rules for assigning colors to string values, and since that is not yet available I would at least like to be able to sort my legend and the assignment of colors in a series Alphabetically.

I included a screen shot layered on top here to show what options are available in the "General" chart properties, and the most flexibility I have is to sort in reverse -- I've found that comes in handy for certain types of charts when pulling into Powerpoint, but within Domo I would rather be able to show the legend alpha on this chart style.

I've been able to force the sort order in other chart types using Beast Mode, etc, but it seems that the combination of the grouped bar chart and the sort I had to put on to get it to display aggregate most to least prevents me from being able to control the order of the legend and color assignment. 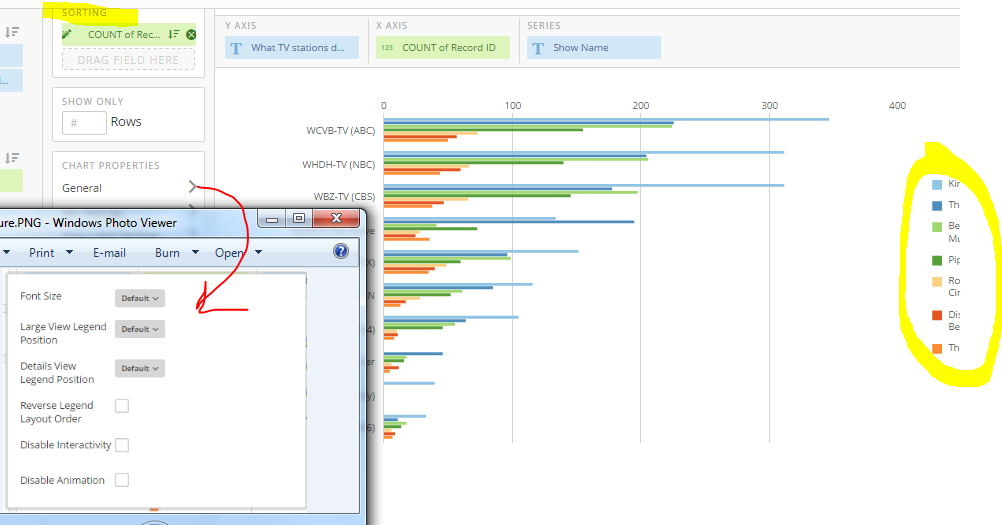