I just need some help with regard to groups.

we created a list of new groups for all our people

and created a card to show all the groups that they are in and it shows that including the new group that we put them in.

we would like to create a Beastmode where, when this person is in their 'legacy' groups and is also in the 'new' group, then they get filtered out.

but if they are only in their 'legacy' groups, then they stay in the card.

Here is an example>>> 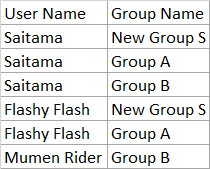 We want to exclude Saitama who is in New Group S

and those that show Saitama in Group A and Group B

We only want to show Mumen Rider left on the list, since he is not included in New Group S

Basically, if you are in New Group S, you need to be excluded from the list, along with all the other 'you' that shows on other Groups

but if you are not in New Group S, you stay on the list.