I've done this previously in Excel, trying to think about how I might do this in Domo, but it just isn't coming to me.  What I'd like to show is this... 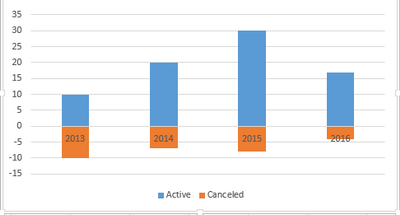 For a given X-Axis date value which represents a transactional vintage, I'd like to show how many are still active (positive) and how many have cancelled (negative).  The total of the over 0 and under 0 would represent the total original population, but over time each "column" would shift lower as active transactions reach a termination state (think of it like a pile driver hammering a pier into the ground).

So if I had business originated in each of 4 successive years, my X-Axis would show 2013, 2014, 2015, 2016.  Business growth was experienced over that time so the gross count of transactions increases year-to-year.  But also as a vintage ages, more of it terminates.  So 2013 might have a very short positive value, and a similar negative (below 0) value.  Each year would similarly display, but less-and-less would reflect below 0 since it has to age before cancelling, and each year would show more-and-more above zero if only because there was year-over-year volume growth which is not yet offset by cancellation of aged transactions.

I could do this as a "greater than 0" stacked bar by establishing a series for Active versus Cancelled and each transaction represents '1' (or whatever metric).  What I cannot conceptualize in Domo is how to have some values that are '1', and some that represent '-1', without Domo trying to net those results.  I want 100 and -100 to equal 100 above 0 and 100 below zero, not NET Zero.